Remember the spinning tops we used to play with as a kid? It was mesmerising to see how these pointy little objects stayed upright without keeling over. This so-called gyroscopic effect is now part of a robotic solution for supporting people with balancing issues. Before taking this innovation to the field of bicyle delivery,  RoboHouse spoke with medical product developer and researcher Bram Sterke.

RoboHouse Reads. Listen to an audio version of the article here.

“The essence of the GyBAR are those spheres in the backpack,” says Bram Sterke who helped to develop the wearable robot GyBAR at TU Delft and in his current role at Erasmus MC. “They provide a counteracting rotational force. These control moment gyroscopes were already used in aerospace and boats, but not yet in healthcare. I spoke with practitioners about a possible application in the clinic. Now there’s the GyBAR, a medical aid for people with balance disorders due to a stroke or spinal cord injury.”

To me, the essence of the GyBAR are those spheres in the backpack.Bram Sterke, researcher and medical product developer at Erasmus MC

The GyBAR development team has been working hard. They have made great strides since their last prototype. “We have reduced the weight significantly. We went from 16 kg to 5 kg,” says Sterke. There are also still things to work on. “Right now, an issue is the sound it makes. It produces a noise similar to a dentist’s drill.”

Just like Bram who found use for gyroscopes in a new field, our If You Would Use This-series brings budding technology to new areas in the world of physical work. To learn from the future. Because technology often ends up in different places than its inventors have in mind.

We met with Justin, a bicycle courier at grocery delivery service FLINK, and explained the GyBAR and its essential qualities. Then we asked him: “What if you would use this? How could this robot change life on the bike?”

Bicycle couriers tend to be high-energy people. Justin fits that mold. His delivery job is just one of the many things that keep him busy. He currently also studies accounting and works an internship. On top of that, he is trying to start up a small apparel business. “I see my job as a way of financing my plans. With this enterprise, I can put my creativity to work.”

We noticed his creativity and thoughtfulness in the brainstorming session as well. Justin swiftly came up with four different ideas of how the GyBAR could make his work life easier.

Justin’s first idea stays close to the current goal of GyBar:  “If the backpack could help with balancing, I would be able to deliver even faster without it being unsafe.” He already has a big backpack to put the orders he delivers in. Could the technology be implemented in this bag?

The orders can be heavy, which is inconvenient especially over longer distances. Perhaps the backpack could take some of the weight off Justin’s shoulders. This would be less tiring and also more efficient. He says: “Sometimes three couriers all head in the same direction with one order each, because the orders are too heavy. It would be much more efficient to just send one courier with three orders.” 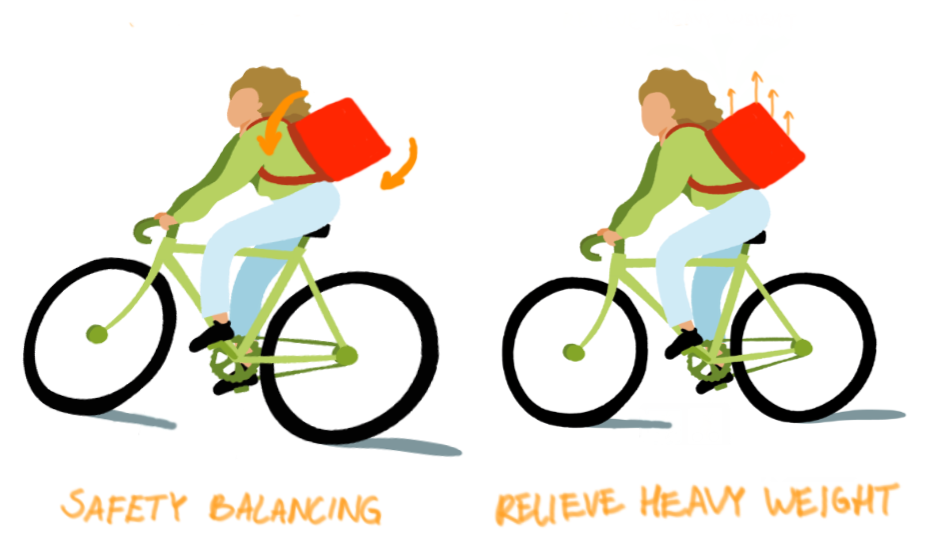 Delivering when it is raining is a lot more uncomfortable.Justin, bike courier for an online supermarket

When asked about the downsides of his work, Justin told us: “I really enjoy riding around delivering when the weather is nice. Delivering when it is raining is a lot more uncomfortable. Umbrellas or rain hoods don’t work that well on the bike and it can also create unsafe situations.’ Bad news; bad weather is when people decide to order groceries. Justin sees an opportunity in the robot backpack: “Adding something that protects me from the rain, but is not impractical on the bike would be perfect.”

Bike delivery can get dangerous, especially when the streets are slippery with ice. And electrical bikes go a lot faster than a normal one. When you fall, you fall badly. Justin imagines a way he could land softly in  case he loses his balance. “The backpack could have airbags that pop out when you crash.” 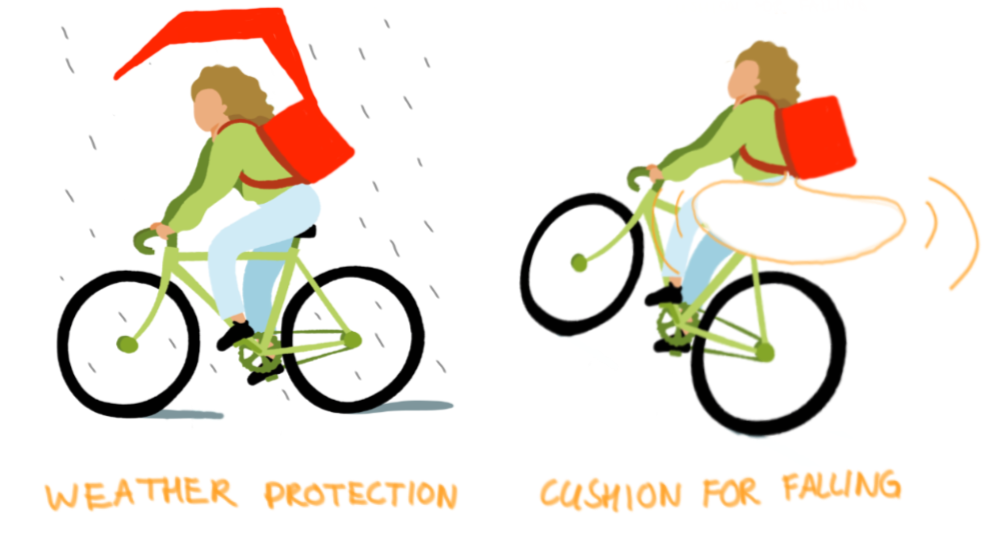 It would be interesting to see what happens when you don’t just stick with the backpack.
Bram Sterke

Something that stands out from Justin’s ideas, is that they add extra features to the existing product. For the GyBAR to be useful to Justin, he apparently needs additional functionalities. Which makes sense when we consider working life on a bike. With extra balance comes extra speed. But more speed also brings more risks and more discomforts. Hence the new features.

What does our scientist think?  Bram points out that Justin’s ideas all seem to start with the notion of GyBAR as a backpack. He says: “It would be interesting to see what happens when you don’t just stick with the backpack. You could get the gyroscopic spheres out of the backpack and attach them to the bike for instance.”