A robot that helps store employees by moving through the supermarket and shelving products in their proper place. According to researcher Carlos Hernández Corbato of the Department of Cognitive Robotics, this may be possible in the future. But the robot must be able to adapt to the dynamic and challenging conditions in a supermarket. Hernández Corbato says: “My research focuses on using artificial intelligence to make machines smarter and more reliable by teaching them symbolic knowledge. The goal is to develop robotic ‘brains’ for intelligent robots that can be trusted to work alongside people, because they can explain their decisions.” 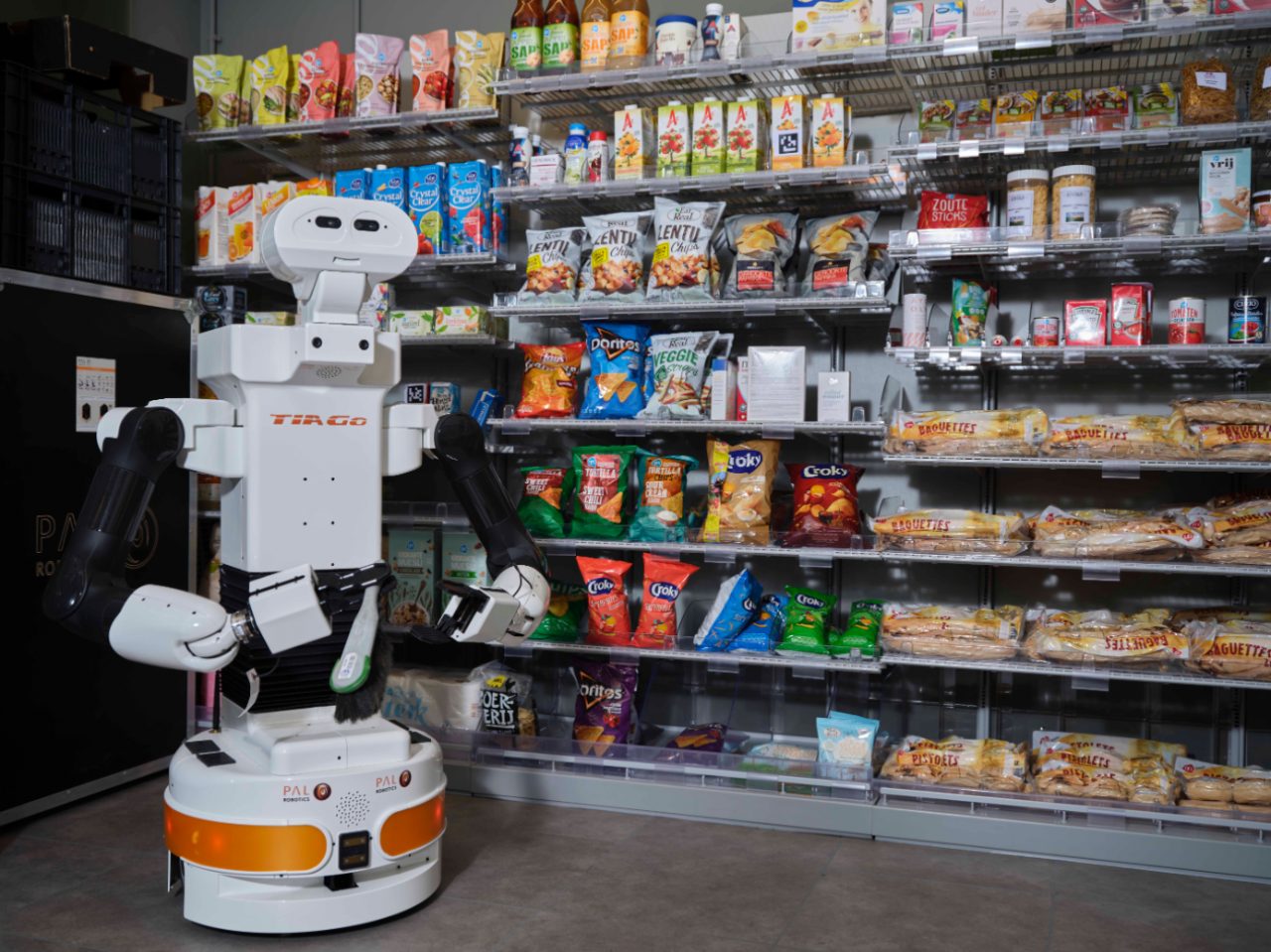 How can an independently operating machine handle the lively chaos of a supermarket safely, efficiently and intelligently? By activating symbolic knowledge that we humans also use, says Hernández. “We recognize a tray with four legs underneath as a symbol: ‘table’. We don’t need a photo for it. When we encode such ‘symbol language’ and make it suitable for robots, they can perform more complex tasks.”

One look with its camera eyes and the robot knows it is facing an object on which plates and cups can be placed. Based on this, it can decide what to do. The acceleration that this produces, should enable robots to perform multiple actions at the same time: navigate, pick up and move objects, and ultimately communicate with people.

Retail requires robots to use a broad diversity of skills: to perceive the environment, navigate around it, manipulate objects or collaborate with humans. – Carlos Hernández Corbato, TU Delft department of cognitive robotics

For Hernández, the AI for Retail Lab research program at RoboHouse of supermarket chain Ahold Delhaize brings together everything that fascinates him about artificial intelligence. Retail requires robots to use a broad diversity of skills: to perceive the environment, navigate around it, manipulate objects or collaborate with humans. For him, it’s all about the question of which algorithms are needed to make a machine respond just as intelligently as a human brain. As a specialist in software for autonomously operating robots, he already won the Amazon Picking Challenge in 2016 with a team from TU Delft. At this occasion a robotic arm placed products from a container in their place on a shelf. 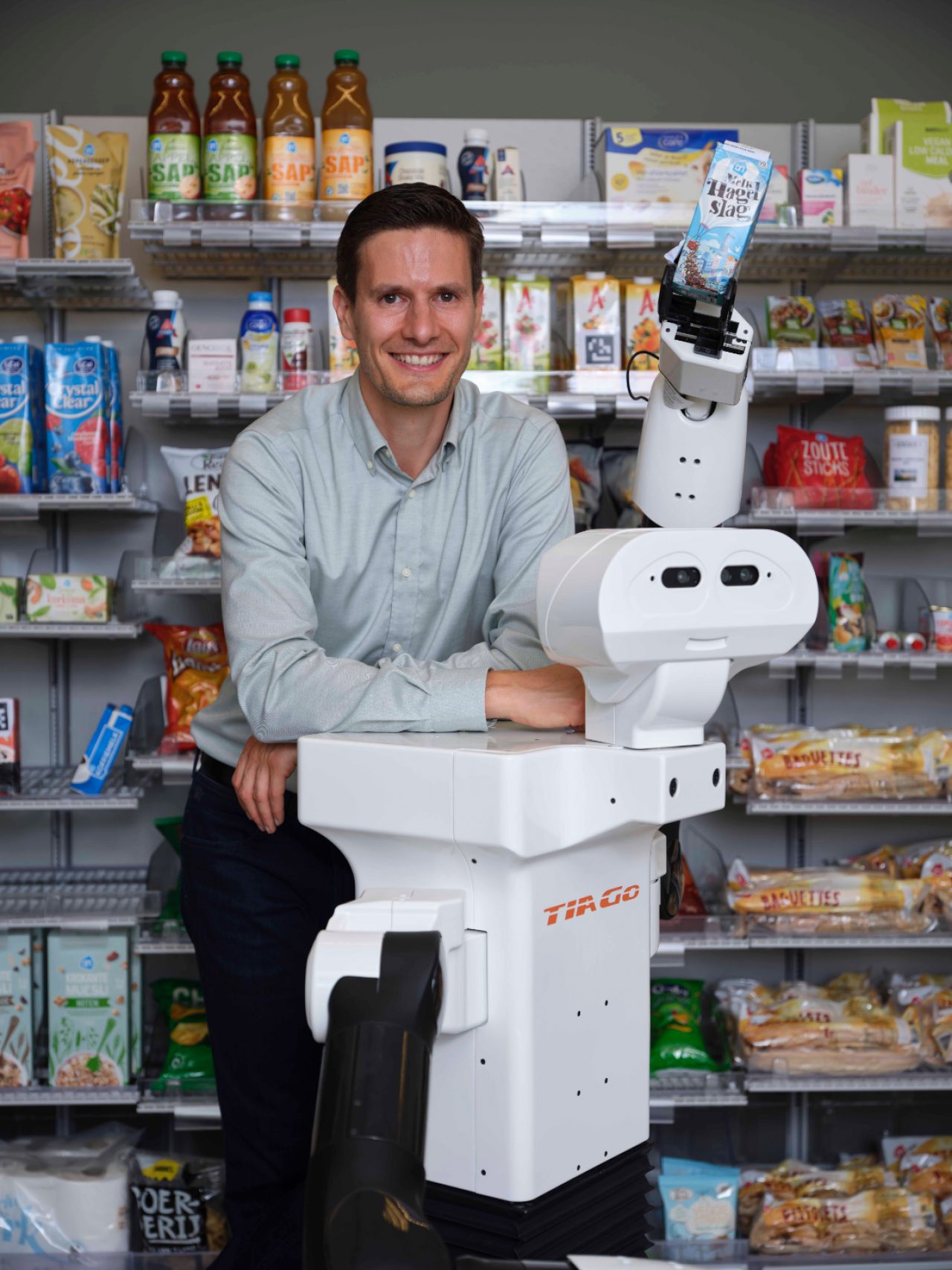 The ‘supermarket robot’ is even more challenging. It requires the leap from a static factory environment to the dynamics of a store. The traditional way, in which robots learn from the data they collect, is too cumbersome for that. The robot would already get stuck in stock management. Programming a customized robot treatment for every orange, bottle, soup can, milk carton or cucumber would be too much work. “We want to inject symbolic knowledge into the robot’s operating system all at once,” says Hernández. “If that knowledge is available, the robot can continuously adapt to his changing environment. For example, by downloading a different hand movement.”

We need to endow robots (or any intelligent autonomous system) with self-awareness so that we can trust them. – Carlos Hernández Corbato, TU Delft department of cognitive robotics

The robot must be able to independently choose a different algorithm if it encounters a problem along the way. So that he can pick up a can that falls from his hands, or change the grip of his hand slightly when picking up an unknown object. The technicians have already set up a test shop where robot ‘Tiago’ can practice with it. In about five years’ time, it should deliver a machine with a mobile base, two arms and two camera eyes, which independently refills supermarket shelves 24 hours a day. And it must be able to do that under all circumstances, day and night.

The latter does not only apply to the supermarket robot. In fact, every robot should have a next generation operating system to better cope with changing circumstances. Hernández Corbato: “Beyond integrating different robot skills, cognitive skills for robots need to enable them to reason about those skills, to understand how they can use them, and what are the consequences of their own actions. In sum, we need to endow robots (or any intelligent autonomous system) with self-awareness so that we can trust them.”

It is the core idea behind the European project Metacontrol for ROS2 systems (MROS) that the Cognitive Robotics department recently completed. The AI technique that Hernández used for this is called the metacontrol method. It describes the properties and skills of the robot in a structured way, so that the robot can use the knowledge to adapt and overcome problems.

As part of this research, he developed multiple prototypes of these next generation robots together with Bosch Corporate Research, Universidad Rey Juan Carlos, Universidad Politecnica de Madrid and IT University in Copenhagen.

Does it perform better than traditional robots? “Yes, he navigated more safely and, thanks to its symbolic knowledge, was able to adapt to the circumstances. When one sensor broke, it switched to another independently,” says Hernández enthusiastically. “That is where we want to go to: a robot with sufficient intelligence to deal with failures.”

An epic development trajectory of more than 20 years is drawing to a close. Space operations engineer Lodewijk Aris has been with it every step of the way.

As NEXTdriver completes its move to a scale-up location on TU Delft Campus, we sit down with Guido Sluijsmans, CEO and co-founder, to reflect on his firm’s transformation.