Dutch brewing company Heineken is one of the largest beer producers in the world with more than 70 production facilities globally. From small breweries to mega-plants, its logistics and production processes are increasingly complex and its machinery ever more advanced. The global beer giant therefore began looking for robotics solutions to make its breweries safer and more attractive for employees while enabling a more flexible organisation.

“The environment is constantly changing and the robot has to be able to respond immediately.”


Automatically adapting to the situation

Dennis van der Plas, senior global lead packaging lines at Heineken, says, “We are becoming a high-tech company and attracting more and more technically trained staff. Repetitive tasks – like picking up fallen bottles from the conveyor belt will not provide them job satisfaction.”  As part of the SMITZH innovation programme, Heineken and RoboHouse fieldlab, with support from the Netherlands Organisation for Applied Scientific Research (TNO), have developed a solution on the basis of flexible manufacturing: automated handling of unexpected situations.

According to Shobhit Yadav of TNO, flexible manufacturing is one of the most important developments in smart industry. “Today, manufacturing companies mainly produce small series on demand. It means that manufacturers have to be able to make many different products. This can be achieved either with a large number of production lines or with a small number that are flexible enough to adapt.” The Heineken project fell into the second category and involved developing a robot that could recognise different kinds of beer bottles that had fallen over on the conveyor. The robot had to pick them up while the belt was still moving. “The environment is constantly changing and the robot has to be able to respond immediately”, explains Shobhit. “This is a typical example of a flexible production line that automatically adapts to the situation.”

Robotics for a safe and enjoyable working environment

Industrial robots have obviously been around for a while. “The automotive industry deploys robots for welding car parts, whereas our sector uses them for automatically palletising products”, says Dennis. “But with this project we took a different approach. Our starting point was not a question of which robots exist and how they could be used. Instead, we focused on the needs and wishes of the people in the breweries, the operators who control and maintain the machines and how robots could support them in their work.”

The solution, in other words, had to lead not only to process optimisation but also ­– especially – to improved safety and greater job satisfaction. In addition, it would result in Heineken becoming a better employer. It is why Dennis and his colleague Wessel Reurslag, global lead packaging engineering & robotics, asked the operators what they would need to make their work safer and more interesting. One of the use cases that emerged was picking up bottles that had fallen over on the conveyor belt: repetitive but also unsafe as the glass bottles could break.

“The lab is the place to meet for anyone involved in robotics.”

Experimenting without a business case

Heineken initially made contact with RoboHouse field lab through a sponsorship project with X!Delft, an initiative that strengthens corporate innovation and closes the gap between industry and Delft University of Technology. “The lab is the place to meet for anyone involved in robotics”, says Wessel. “It is also linked to SMITZH and thus connected to TNO.”

The parties soon realised that their ambitions overlapped. Heineken was seeking independent advice and both TNO and RoboHouse were looking for an applied research project that focused on flexible manufacturing. “This kind of partnership is very valuable to all involved”, says Shobhit. “SMITZH allows us at TNO to work with current issues in the industry and establish valuable contacts, which makes our research more relevant. In turn, manufacturers have somewhere to go with their questions and problems regarding smart technologies.”

Accessible way to do research and experiment

The guys at Heineken have nothing but praise for the innovative collaboration with TNO and RoboHouse. Dennis says, “The great thing is that all project partners were in it to learn something. At RoboHouse, we had access to the expertise of robotics engineers and state-of-the-art technologies like robotic arms. We supplied the bottle conveyor ourselves and TNO also added knowledge to the mix. It is an accessible way to do research and experiment. This would be a lot more difficult with a business case, which must involve an operational advantage from the start.”

“Through close cooperation, we really developed a joint product.” 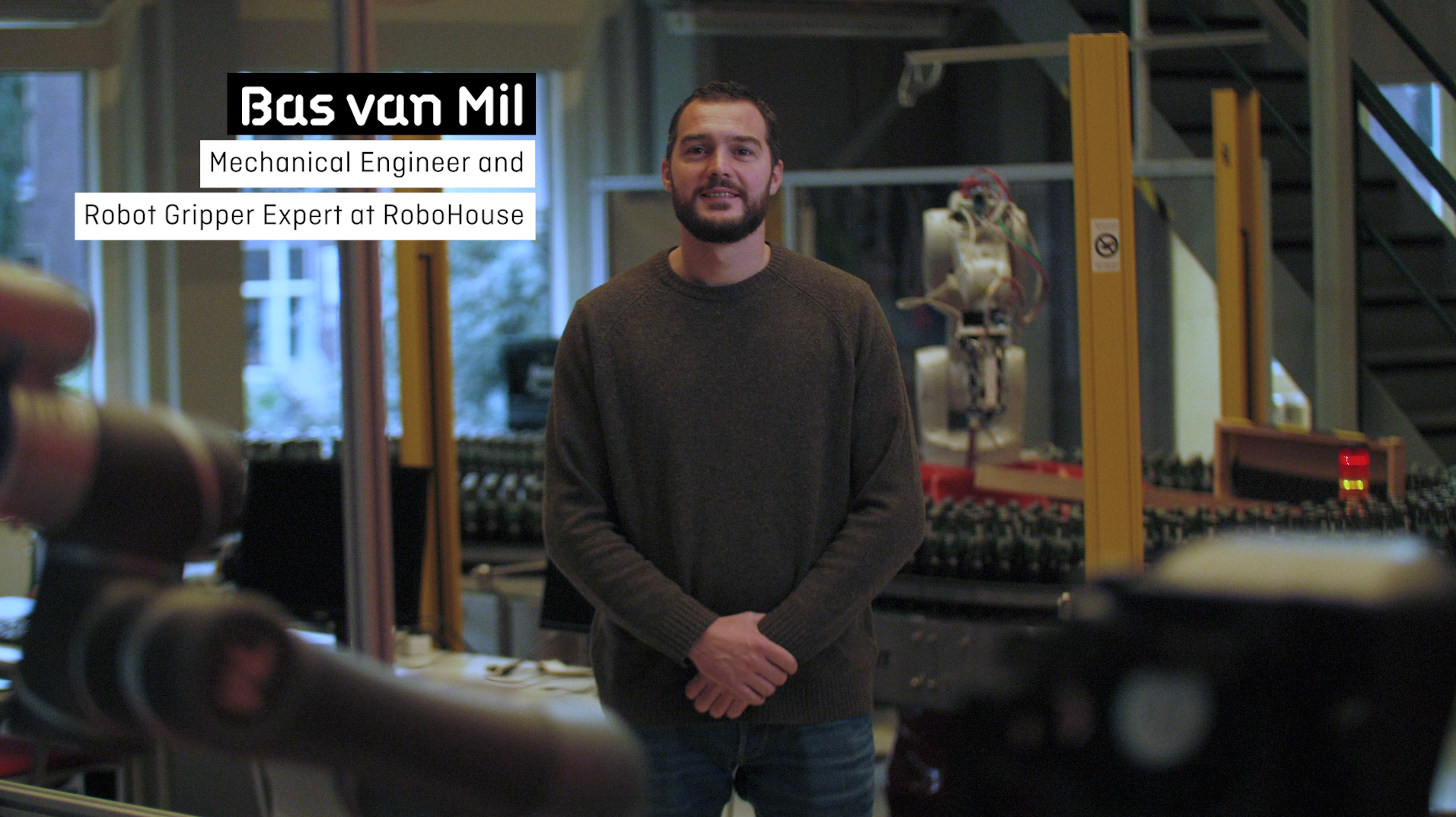 A joint product by TNO and RoboHouse

TNO and RoboHouse distilled two research goals from the use cases presented by Heineken: enabling real-time robot control and using vision technology to direct the robots with cameras. The main challenge involved devising a solution that could be applied to Heineken’s high-speed packaging lines. TNO worked on the control and movements of the robot, while RoboHouse took on the vision technology aspect. This entailed recognising the fallen bottles, developing the system’s software-based control and building the ‘gripper’ to pick up the bottles.

“In many existing robotic systems, […] the robot will do a ‘blind pick.’”

“Communication between the robot and the computer is very important”, explains Bas van Mil, mechanical engineer at RoboHouse. “Our input and TNO’s work were complementary. For example, RoboHouse did not possess Shobhit’s knowledge of control technology, which is indispensable for controlling the robot. Through close cooperation, we really developed a joint product.”

The biggest challenge in detecting and tracking fallen beer bottles is that they never stop moving. As Bas explains, “They do not just move in the direction of the bottle conveyor but can also roll around on the belt itself. In many existing robotic systems, the camera takes a single photo that informs the movements of the robot. The robot will do a ‘blind pick’ with no way of knowing whether anything has changed since the photo was taken. This only works if the environment stays the same – but in this case, it doesn’t.”

The solution involves a system in which the camera and the movements of the robot are constantly connected to each other. Bas says, “Every millisecond counts as the bottle will disappear from view and the robot will still try to pick it up from the spot where it was half a second ago.” A RoboHouse programmer developed the camera software to be as fast and efficient as possible. The field lab even purchased a powerful computer running an advanced AI system especially for the project.

“We are receiving feedback as well as requests for the new robotic systems from breweries all over the globe.”

TNO and RoboHouse then wrote a programme together that determines the speed of the robot from the moment a fallen bottle is detected. This enables the robot to move with the bottle based on its calculated speed. It is what makes this robot so different from existing ones. “The robot responds immediately to changes”, says Shobhit. “In fact, it is 30 per cent faster than the current top speed of Heineken’s bottle conveyors. As a result, it has a wide range of applications and can be used in a variety of environments with different production speeds.”

Smarter thanks to independent partners

Heineken valued not just the successful innovation but also the independent character of TNO and RoboHouse during the development process. Dennis says, “We now have a much better idea of what is technically feasible, what the challenges are and what we can realistically ask of our technical suppliers. Thanks to this project, we can act much more like a smart buyer and make smarter demands of our suppliers. This information is relevant to have, especially as we operate in such an innovative field where we do not just buy parts off the shelf. After all, if I ask too little, I will not get the best out of my project. But if I ask too much, it affects our relationship with the supplier.”

The project has also served as a source of inspiration for Dennis’s colleagues worldwide. “We have been sharing videos and reports from SMITZH on the intranet, building a kind of community within Heineken. We are receiving feedback as well as requests for the new robotic systems from breweries all over the globe.” To meet the demand, Dennis and Wessel want to supply breweries with a ready-to-use version. “We are currently looking for parties that can make the technology available and provide support services.”

Meanwhile, RoboHouse and TNO aim to continue optimising the robot. “This is only the pilot version”, says Bas. “We can still improve its flexibility, for example by installing a different vision module, thereby making the technology even more widely applicable.” Both organisations are therefore looking for use cases in which they can use the same technology to solve other problems. “We are looking at the bigger picture”, explains Shobhit. “This project could serve as a model for similar challenges in other industries.”

All parties emphasise the benefits of working together and sharing knowledge to achieve a successful and relevant innovation. “There are very few places like SMITZH where manufacturing companies can go with these kinds of questions”, says Shobhit. “SMITZH is quite unique in that sense and is vitally important because it offers a specific platform for appropriate collaborations.” Wessel agrees: “If there is one thing this project has made clear, it is that producers like Heineken, tech companies and knowledge institutions should collaborate more intensively to substantiate these kinds of projects. You won’t find a solution in a PDF or a presentation. There can be no genuine solution until it is made real and put into practice.”

Do you have a similar use case and are you, like Heineken, searching for a practical solution? Or would you first like to learn more about RoboHouse or this specific project? Feel free to contact our lead engineer Bas van Mil, or email SMITZH with questions about its collaboration programme, or contact Shobhit Yadav at TNO more information.

SMITZH is an innovation programme focused on smart manufacturing solutions in West Holland. It brings together supply and demand to stimulate the industrial application of smart manufacturing technologies and help regional companies innovate. Each SMITZH project consists of at least one manufacturing company and a fieldlab. RoboHouse served as the fieldlab in this project.